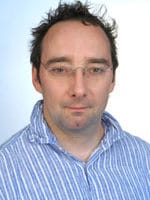 Dr Bew graduated with a BSc in Chemistry from the University of Leicester. He subsequently moved to the School of Chemistry at the University of Bristol where he undertook his PhD under the supervision of Professor J. B. Sweeney. His PhD was concerned with the synthesis of organotin derived 3-sulpholenes, their cheletropic properties and cycloaddition chemistry. Upon completing his studies he undertook postdoctoral research at the University of Bath, working on the development of novel 2-nitroimidazole containing Boron Neutron Capture Agents (BNCT) for anticancer applications. Completing his studies at Bath he moved to the Schools of Chemistry at The University of Nottingham and subsequently to the University of Wales (Cardiff, both with professor D. W. Knight) working on aspects of the synthesis of Aplasmomycin, an interesting boron containing macrocyclic antibiotic with antimalarial biological activity. Finally at the Dyson Perrins Laboratory at the University of Oxford he worked with Professor Stephen G. Davies on the development of solution- and solid-phase chiral non-racemic auxilaries probing the differences in their asymmetric chemistry on the two-phases. Whilst at Oxford and in conjunction with Yamanouchi Pharmaceuticals he also worked on the development of new medicinal entities with volume regulated chloride channel bioactivity. He took up his current position in the School of Chemistry at UEA in October 2000 and was promoted to Senior Lecturer in 2008.